Atomic Lighter Reviews - What Is It?

WARNING: DO NOT BUY Atomic Lighter Until You Read This Review!
Is it a Scam? Does It Really Work? 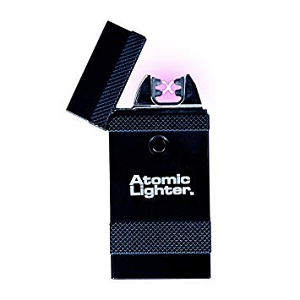 Atomic Lighter is a tactical rechargeable lighter that claims to use plasma arc technology to create fire quickly, without butane or gas. There is limited information about the company behind the item but t is probably located somewhere in the USA. It is called Bulbhead (aka Telebrands). There is an official website that tells us some information about this fuel-free rechargeable lighter. It is promised to be able to work anywhere even in the wind and in the rain. All you will have to do is to press a button and to receive fire the first time and every time you press the button. The product is said to last a lifetime. This plasma lighter is able to deliver more than 100 lights on a single charge. It can be recharged by USB. However, I have a doubt that all of these characteristics really work. Are they unique to Atomic Lighter? Is there any other competition on the market? What other plasma options can you opt for?

Atomic Lighter is a plasma arc lighter, which means that instead of using fuel and forming a flame, this item works by creating a small electrical arc between two electrodes. That arc is claimed to have a much higher temperature than a flame. It is windproof, according to the manufacturer. The current will only flow between two electrodes with a large voltage difference. The lighter applies a voltage only across one diagonal pair of electrodes. Even though it utilizes electricity, you should not be afraid of it. If you accidentally touch the arc, you may feel mild pain, though. Is this product worth purchasing? Let's try to answer this and other questions by taking a look at the advantages and disadvantages of the item, as well as what actual users think about their experience of using the device.

Unfortunately, we failed to find any in-depth online buying guides but we encountered many customer reviews. While some users seemed to appreciate the idea of plasma lighters, others were not as happy. What people liked was that the product can work in just about any condition (rain and wind). It can be easily recharged through any USB port. Each unit is battery powered. Atomic Lighter is considered to be safer than the competition, since no flammable fluid is required. At the same time, the lighting surface of the device is very limited. It is much smaller than the end of a cigarette. These lighters are reported to emit a high-pitched squeal when in use. This can be very annoying. We didn't test the product ourselves, but based on the narrow distance between its electrical arcs, all you can light includes really thinner surfaces, like fireworks fuses, candles, or a small rope. You won't be able to light cigarettes, a backyard barbecue or a bonfire as shown in the Atomic Lighter commercial. This can be really disappointing. Most reviews about the product are negative on Highya.com.

Many customers report that this device is a trash. One woman reports that it worked for only thirty minutes. Then they had to charge it. And this repeated all the time. Another user writes that he saw the lighter in the As Seen On TV section in a store and decided to try it. The man charges the lighter, it will light three times, and then it is a dead. He regrets wasting his 20 bucks. Atomic is a joke, in reality it should produce 2000 or more lights. The guy hopes that the manufacturer reads his review and tries to improve their product. One more customer says that his lighter lasted for just two days, even though he followed all the directions in terms of charging the device before using it. The experience with this product may differ from person to person. After charging it, the man needed to charge it again after just twenty minutes. $20 for two days that's too much! The man decided to stick with Bic.

Another user received Atomic Lighter as a gift for Christmas. For the first week he would get about 8-10 lights off it from a charge. This amount decreased the second week significantly. On the third week, the device stopped working completely. The man liked it when it worked but it broke really fast. He said he would stay with a regular lighter and does not recommend it to buying. The customer service is just awful, based on many customer reviews! You may call them many times before being responded. There is no guarantee that you will need the necessary help. Most customers are not satisfied with the shipping times saying that it may take for up to two months before your order arrives. Another concern is the quality of the product. In reality it is made from cheap plastic, nothing else. According to the words of many customers, the device is not worth the money it costs. To check what other reasons of unhappiness of the customers are let us take a look at their actual reviews.

"I bought AtomicLighter based on the commercial, but when I received it I understood that their claims were wrong. The arc is too small to fit a cigarette into and to light it. I had to move it around for a long time to get it lit. It is a real problem to light a cigarette. The device served too little. I was able to light anywhere from 5 to 15 cigarettes. Do not buy this lighter for this purpose. I was disappointed since I purchased it for cigarettes. It may work well for candles, though. I returned the product and received only half of my money. Waste of money!"

"Atomic lighter worked fine for just a month, after that it would work only occasionally. When I pushed the button it worked only half the time or would come on and off but it wouldn't light anything at all. I am speaking about the device that was fully charged. It took me so much time trying to light a cigarette while driving. The product did not hold a charge for as long as promised. It is only good for the first pack of cigarettes, nothing more."

"Atomic Lighter is a piece of crap! I finally threw it in the trash! I regret believing the commercial. I wasted my money on this useless staff. This product is the worst purchase I have ever made online. I am an honest customer who purchased the lighter and I honestly say that it is not worth buying. Do not order this crap!"

Based on what we have learnt about Atomic Lighter, this device does not seem to perform the claims it is associated with on the official website. The majority of the customers are not satisfied with their purchase for a few reasons. The first one is ineffectiveness of the item. It is not suitable even for lighting ordinary cigarettes because of the too narrow arc. Another drawback is the quality of the product that appears for works for a month, two weeks or only several days. What is good is that there is a return policy, but you will be able to get only half of your money. Since many real users are disappointed with Atomic Lighter, I cannot recommend it either.

Where To Buy Atomic Lighter In Stores?

One can order the product directly from the official website of the company. Each Atomic Lighter costs $19.99, plus free shipping. During checkout, you may buy a second item and an Atomic Beam flashlight for a separate $9.99 fee. So the total cost will be $29.98. The company offers a 30-day refund policy. Beside the official site, Atomic Lighter can also be found on some retail stores, as well as through Bulbhead, a division of Telebrands. You can reach their customer service by calling at 855-668-1655.