Bavarian Edge Reviews - What Is It?

DO NOT USE Bavarian Edge!!! You Must Read This Review!
Fully Researched: Price, User Feedback and More! 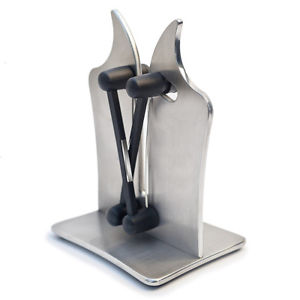 Bavarian Edge is claimed to be the world's best knife sharpener. It has two independent spring action arms manufactured from very tough tungsten carbide that contour and flex to any angle, sharpening damaged and dull blades in just a few seconds. At least this is what the manufacturer promises. Unlike conventional stones, electric devices, and other sharpening tools, this product's professional and portable design can sharpen even beveled and serrated knives. Can this uniquely designed tool really help you bring your knives back to life, as promised on the official website? We will answer this question further in this review but at first let's take a look at how this knife sharpener works. According to A.A. Newton over at LifeHacker, this sharpener works by using two parts of tungsten carbide in the shape of latter "V" to wear away the metal on the blade's side, creating a new edge.

Compared to sharpening steel, that bends the blade back into place, Bavarian Edge removes blade material. But what makes this pull-through knife sharpener different than other manually operated products of the kind? We will cover this in a second, but let's see who manufactures this device. Well, Fairfield is a large ASOTV, NJ-based Telebrands company that also makes such products as Red Copper Pan, Atomic Beam USA, Ped Egg Power, and Hurricane Spin Mop. In general, the company held a D+ Better Business Bureau rating, with 28 customer reviews and about 330 closed complaints. Most of these referenced poor functionality of the product and difficulty obtaining refunds. To understand whether Bavarian Edge is worth your attention or not let us take a look at what real users are saying about their experience of using this device.

As it was already mentioned, the product is associated with a great number of negative customers' testimonials. The most common complaints re referred to poor functionality, high price and difficulty getting refunds. One woman reported in her review that she received a defective device, possibly counterfeit. The product arrived with one side disassembled, so the woman assembled it; however, it would not stay together for too long or sharpen the knives. It pulled through several times, then got loose, and fell apart. The buyer reassembled it but her Bavarian Edge would not work anymore. It felt like she received a knockoff in the box. There was a typo printed on the box - "Pull Knife Towaros You" not towards. The woman returned her purchase ten minutes after receiving it in mail from Amazon. She recommends not wasting your money.

There are many other reviewers who called the product to be terrible. The major reason for such an opinion was the poor quality of the sharpener. It does not even sharpen an edge on an ordinary kitchen knife. It cannot even polish it. The sharpener looks cheap and flimsy. Some people are sure that this device is a "fraud". One guy says that he got his and it does not sharpen a knife at all. The man tried the credit card trick but it failed. Another buyer reported that his purchase had molding defects. One side was too tight and did not even move properly. Besides, the product was made of plastic. One disappointed buyer says that she received the sharpener out of its original package. It looked like it had been dropped and used. Returning the sharpener cost her more than the product costs itself. All this means that the company does not really care about its customers. Such a product cannot be recommended. Many other users reported that Bavarian Edge doesn't work as advertised. It does not sharp. Cheaper sharpeners tend to work much better. The product often ships from China and the product often falls apart after the very first usage. One woman confessed in her testimonial that metal sharpening blades fell out of the package. The box itself was crushed during shipping. Let us take a look at the experience of actual users of the product.

"BavarianEdge is nothing more than a piece of trash. It was a real disappointment for. The product is so badly made, that it fell apart before I used it. It was completely unusable. There were missing parts and the feet fell off. I decided not to return it since it would cost even more than the product itself. I just threw it in trash. I would not recommend this device to anyone."

"Bavarian Edge is a cheap device that is not supported by manufacturer. I was not able to use it because one of the sharpening files was missing from the unit. I contacted the manufacturer to check whether they would solve this problem before I wrote this testimonial, but they refused to help me. They simply told me to contact Amazon but Amazon was not the manufacturer of that product."

"I ordered my Bavarian edge one morning by impulse after seeing its attractive advertisement on TV. A week later, I realized that it wasn't going to be shipped within the following month, so I tried to cancel my order. But I was told that it was already en route. It turned out that it was shipped from China. It is made in China from cheap plastic. One of the sharpening stones was dislodged which made it worthless. I reset the stone and tried to sharpen my small kitchen knife, but on the second pass, the stone fell out again. Avoid this useless product."

Although we didn't test the Bavarian Edge ourselves, based on our research, it does not appear to be a worthy purchase. From a consumer perspective, this manual sharpener does not accommodate many blade types and angles, as claimed by the manufacturer. It comes with tungsten carbide arms but has a high price when compared to the competition. It is said to be made by a manufacturer who has been in business for decades but the buyers are sure that this is a Chinese cheap product. Many people complain that they were waiting for their order for a few weeks. The device comes with a 30-day refund policy but, according to numerous customers, it is very difficult to get a refund. Besides, shipping the product back costs even more than the product itself. The company's customer service also leaves much to be desired. Its representatives are often not helpful. Taking into account all advantages and disadvantages of Bavarian Edge, this tungsten carbide pull-through sharpener cannot be recommended to usage. The modern market is full of less effective and better-quality products of the kind for you to choose from.

The product can be purchased from the official website of the manufacturer. One knife sharpener of this brand is priced at $19.99, plus free shipping, although you can buy a second unit during checkout for an additional $9.99 fee. It is not only the manufacturer who sells Bavarian Edge. You can also find it for sale on Amazon for $26.99 plus free shipping. Buying the product from its homepage is comes with a lifetime money back guarantee. According to the Returns Policy page, the device comes with a 30-day policy. We reached out to the Bulbhead customer support and the 30-day guideline was confirmed. Thus, if your product ever breaks, you can ask for your money back by calling at 855-668-1655; however, many customers report that they faced difficulties getting a refund.