Cinder Grill Reviews - What Is It?

DO NOT USE Cinder Grill!!! You Must Read This Review!
Fully Researched: Price, User Feedback and More! 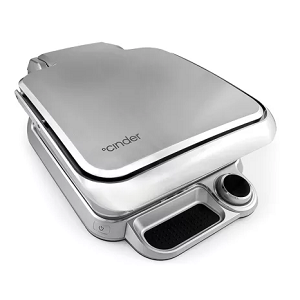 Cinder Grill is said to be the world's first precision grill by the manufacturer. This kitchen device uses satellite-inspired software controls, advanced electronics, and two ceramic nonstick plates for cooking frozen or fresh food. According to the official website, the cooking surface of the device adjusts hundreds of times per second to control the temperature of your food within one degree. Then it informs you via a smartphone application when the dish is ready. You are promised to achieve like sous-vide perfection, with no risk to overcook your food. But unlike sous vide, you will be able to cook your dish three times faster and sear it on the grill. If you prefer perfectly cooked meat, but hate the sous vide way of cooking, the concept behind this grill certainly seems appealing. Will it really provide you with "Michelin-starred perfection"? Is it worth the money it costs? We will answer these important questions further in this review but at first let's take a look at how Cinder Grill works.

First of all, the device is 13" wide, 17" deep, and 7" high in the closed state, with a maximum vertical height of 18". It features nonstick ceramic grill plates on top and bottom which will allow you to close the lid, like the one of a countertop grill. You can also keep it open to cook food on a griddle or a pan. According to the company, you will be able to cook any foods you usually do using a grill, frying pan, griddle, or stovetop pan, including tofu, meat, eggs, desserts, vegetables, and sandwiches. This device can also be used to defrost foods and cook frozen foods, although it is not suitable for boiling or simmering liquid, baking, or steaming. Cinder Grill can be paired with the free mobile app to automatically set the temperature of your food by measuring its thickness and using algorithms to define the time of cooking. The grill features a lot of tiny heating nodes (light bulbs) which are built into its plates. They constantly turn on and off supporting a precise temperature. The company behind Cinder Grill is based in San Francisco, CA, Palate Home Inc. It was co-founded in 2012 by CTO Jim Reich and CEO Eric Norman. The Cinder Grill is the only product of the company with very limited customer feedback on such popular websites as TomsGuide, PC Mag, CNET, and Digital Trends.

This countertop grill uses special sensors and proprietary algorithms to reduce cooking time and maintain a proper temperature regime, compared to sous vide. But unlike sous vide, it allows to reach higher temperatures enough for searing. When the device determines that your food has reached its necessary temperature, you can allow it to remain for up to two hours, or, you can remove your food from the grill, let it work on the sear mode (450 degrees), and put the food back for 45 seconds. You can sear the sides with the help of tongs holding your food against the hot grill for 15-20 seconds. Once you are finished, wipe the Cinder's grill plates with a damp paper towel, and wash the drip tray once it fills up.

There are few customer reviews about the Cinder Grill on third-party websites, which is a bad sign. It may mean that the product is either not popular among users or it has negative reputation. Generally speaking, the grill has both positive and negative testimonials. The most common compliments reference its ability to cook tasty food and its ease of use and cleaning. However, the most common complaints about the device were that the grill is too bulky, expensive, and that the application leaves much to be desired from the perspective of its features. It is currently available only for iOS devices). Many users; however, are not satisfied with the taste and texture of their food. They say that the same results can be achieved with cheaper devices. It should be noted that the heavy lid of the grill has a tendency to squash some foods, like cheese sandwiches or vegetables. While some websites noted that this grill is a good value, the others felt otherwise. Some people seemed to agree that it is a worthy alternative to sous vide but still its current incarnation is not as versatile as desired. Besides, it has a much higher price point than the competition available on the market. The customers are not pleased with the fact that the Cinder app is only available for iOS. They are promised that an Android version is coming soon. However, the grill can be used without this app by setting the temperature using the dial in the manual manner. The device will beep once your food is ready. Once connected wirelessly via Bluetooth, the app expands the grill's functionality by providing you with a set-it-and-forget opportunity. You will be able to select the food you want to cook from a list and choose the way it will be cooked (rare, medium, or well done). The Cinder Grill will measure your food and estimate the necessary cooking time. All you will need to do is to press "Begin Cooking." Let us take a look at the real customers' testimonials available online.

"CinderGrill is the company that will only take your money without providing you with a high-quality product. I made my pre-order in January 2017. The delivery date was October 2017, which sounds ridiculous, but I still went for it. I called them in October and was told that there were delays. I had to wait for another month but I did not get my order till December. It is March now. The company is non-responsive and refuses to refund me. They took more than $500,000 from such customers like me. Thousands of customers are left without the product and their money."

"I was excited about the Cinder grill when I saw an advertisement about the product. I placed a "preorder" for a reduced price in April 2017 via Indiegogo. An anticipated release date was November 2017. It is December now and I want my money back. According to the official website for the grill, I can get a refund if the campaign is active. It is active on Indiegogo, as far as I understand but I have not been able to contact their customer service. I sent them emails and called a phone number listed on the site but it is useless. I have not received any response from them."

"Cinder Grill is a scam. I ordered the grill two months ago and I still haven't received it. They just took my money and do not explain anything. I cannot reach the customer service either. Can anyone help me get my money back? Do yourself a favor and stay far away from this company."

Taking into account everything we have learnt about Cinder Grill, the company behind this product seems to be a scam. According to many customer reviews, people who have ordered the device have not received it yet. They are unable to get a refund either, because it is impossible to reach the company's customer service. If you want to cook your food in a sous-vide style, you are recommended to look for some other options available on the market. The Cinder Grill is associated with too many problems, which is why it cannot be recommended to ordering.

Where To Buy Cinder Grill In Stores?

Cinder Grill is available on Indiegogo. One unit is priced at $499, two grills can be ordered for $948, while three grills cost $1,397. According to the site's refund policy, you can get your money back within ten days of placing your order; however, none of the customers has managed to get their money back yet. The grill's manufacturer provides a one-year warranty on all grills (excluding submersion in liquid, abusive usage, etc.), which they replace or repair at their discretion. To file a warranty claim, you will need to contact the Palate Home Inc's customer service by calling at (877) 577-3361 or sending your message to hello@cindercooks.com. Beware; this company seems to be a scam.