Fanchest Reviews - What Is It?

WARNING: DO NOT USE Fanchest Until You Read This Review!
Is it a Scam? Does It Really Work? 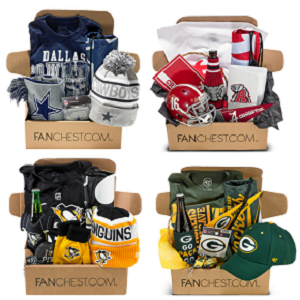 Fanchest is a box that can be ordered online and consists of officially collectibles and licensed gear for sports fans. It can be a great gift for sports fans, since it allows to choose licensed sports gear for one's favorite team. The company behind the service claims that its "chests" are a perfect gift solution for sports fans. There is a satisfaction guarantee for each purchase and the quality of gear is guaranteed too. According to the rep of the company, Fanchest was founded in 2015 by Dan and Jeff - two big sports fans who have been doing their market research for eight months in order to determine how to create a company that would serve the sports community. They realized that there was a market gap for females who wanted to purchase sports gifts for males, so they thought that Fanchest would meet that need pretty well. At present, 75% of the company's customers are women, according to statistics. But does the company really offer good value for sports fans? Is there any better competition? In this article we will answer these questions. Let's start from the details on Fanchest.

Each box features fan gear from brands such as '47, Tervis, WinCraft, Out Stuff, Top of the World, and more. Items may include memorabilia, apparel, headwear, decals, flags, drinkware, and other goods linked to the team you choose. At the moment, Fanchest offers boxes for select teams from the MLB, NHL, NFL, NBA, and college leagues. They also offer baby boxes for the smallest fans! Box contents change each three months and a standard box costs $59. There are also limited edition boxes but they may be so much more expensive. Shipping is free on orders over $75. When you sign up for the service, you will need to provide a t-shirt size. They use high quality brands, so the garments are expected to have good quality too. What will you find in your box? For example, Buffalo Bills box may include a T-shirt (about $39), Buffalo Bills Minted Coin Card ($19.99), Buffalo Bills NFL Banner Flag ($21.40), WinCraft 2-Sided Can Cooler ($7.95), WinCraft Multi-Use Decal ($5.98). the box may also include a "Golden Ticket" that offers a chance to win "ultimate prices and VIP experiences" from your team. You may win, for instance, 10% off any purchase at Fanchest.com.

As a matter of fact, there are not so many reviews from real sports fans who have bought gift boxes from Fanchest. We looked at available customer reviews to get an idea whether the company's customers are really satisfied with what they receive. According to the articles available on hockey-focused Icethetics.co and Business Insider, the quality of the contents within their boxes is good, which is clear, taking into account a high price point. However, based on the real customers' reviews, not all clients are impressed with the quality of the contents of their boxes. We encountered both positive and negative reviews about the t-shirt quality. One Icethetics reviewer noted that his gear included a novelty coin that had the wrong date printed on it (it indicated that the Lightning franchise was established in 1991, while it occurred in 1992). This made the man suspect that it was not an original garment. It is still unclear whether it was a misprint and or a more serious issue.

The reviews we found on Fanchest's Facebook page are not as positive as the company's claims. The brand had many posts from actual customers reporting that they were unhappy with the quality of the items they received in their boxes. They say that they thought the box would contain what was pictured on the official website of the company. Besides, the site showed that there would be at least 5-7 products in each box. However, some customers report that they received only three or four items. They were very disappointed. Many of the customer reviews on Facebook showed that they believed they could purchase the same gear in most sports stores at a much lower price. A few customers also mentioned that they received their boxes without any gift wrapping, as promised by the company. Some of them received wrong T-shirt size, even though they indicated their actual size when ordering the product. Several individuals reported that they had to pay additional money for a signed memorabilia. We also encountered some reviews from the clients saying that the company's customer service was hard to reach. The company didn't return their calls, Facebook messages or emails. It is high time to take a look at the testimonials from actual customers of the service.

"I have been waiting for the Fanchest Bears box for too long! I ordered this product as part of my husband's anniversary gift. I am lucky that I got something else for him too. This box arrived after the anniversary date. All I can say is that it is not worth the money it costs! I paid an unbelievable price for a box with generic trinkets- a tee, luggage tag, Laynard, and a generic sign! I was disappointed! Don't buy it!"

"I have recently received my first Fanchest box for my birthday, but I wasn't happy as I expected I would be. I only received a few items and paid $80 for the box! I regret having wasted so much money. What's worse is that you cannot return your purchase back to the company. Save your money!"

"I'm not impressed with Fanchest boxes. I purchased two of the high end boxes and checked both of them thoroughly. Everything was duplicates! The only difference was the more expensive box contained an autographed puck. As a result, I have duplicate coins, two can cozies two team flags, and two stickers. That's ridiculous."

While researching the details about Fanchest, we have found out that which this company offers a great gift idea for sports fans, they do not appear to meet the customers' needs. Based on the customer reviews left online, many people who have ordered gift boxes from the company, are disappointed with their purchases. Many of reviews carry a negative character, including those found on Fanchest Facebook page. We have encountered dozens of complaints from unsatisfied customers which mainly centered on the low quality and small number of the products within the boxes. Some of customers stated that there were missing items and that they received the wrong sizes. Overall, Fanchest looks like a good option for sports fans, but because of too many complaints, I cannot recommend it. By the way, the company fails to refund their unsatisfied customers.

Where To Buy Fanchest In Stores?

According to our research into Fanchest pricing, the standard box from the company starts at $59.99, plus shipping. The pricing of a box with signed memorabila may vary from team to team, it is usually between $145 and $225. The pricing for other chest options may vary too, some teams are on sale for $39. The company offers a wide variety of shipping options, including USPS Priority ($9.99) 2-day ($18.99), FedEx ($5.99 per order), and overnight ($29.99). Purchases over $75 come with free shipping with FedEx. According to the company's official website, they offer exchanges for the tags that are left intact and sizes that don't fit. They also provide a full refund to any customer who is not satisfied with their purchase. The company can be contacted to discuss any product issues through their Facebook page or at sales@fanchest.com.