Garden Genie Gloves Reviews - What Is It?

WARNING: DO NOT USE Garden Genie Gloves Until You Read This Review!
Is it a Scam? Does It Really Work? 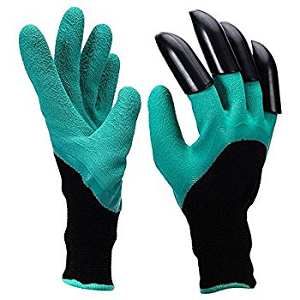 Garden Genie Gloves are specially created for working in the garden, since they allow the user to dig small holes and plant without using any other tools. The product is manufactured by the company called Garden Genie; however, this is not a reputable or popular company in the country. It does not seem to manufacture any other products. There is an official website but it mostly focuses on the gloves and their benefits. The site is full of claims and even contains an advertisement video. However, there is no contact information or any other data about the manufacturer. It means that if you have any questions or complaints, you won't be able to resolve your situation. Let us take a look at the company's claims about Garden Genie Gloves.

Garden Genie is a pair of gloves meant for gardening and doing the yardwork. They feature a special design to allow you to do basic tasks without using any additional tools. The manufacturer of the product claims that it is made from high density plastic that can be easily rinsed clean. The gloves promise to prevent cuts and blisters, as well as to be puncture resistant. The product is available in two sizes. We managed to learn that the product's official website is buygardengenie.com. It was registered in January 2016. Can Garden Genie Gloves really make gardening tasks (planting and digging) easier? We are going to answer this question further in this review. The best way to do this is by taking a look at the real customers' reviews left online.

The commercial for Garden Genie seems to be very promising, but what is the difference between these gloves and an ordinary pair of garden gloves which can be bought at any local retailer? Garden Genie gloves seem to be an ordinary pair of gloves, but if you take a closer look you will see that these are not standard gloves. One of the two gloves features "gardening claws", hardened tips which can be used for digging without a hand tool. This design can be useful for softer soil, but it will certainly fail when used with harder areas. Garden Genie are said to be waterproof, which is not surprising with a great variety of other waterproof garden gloves available on the market. You will be able to work with moist soil without getting wet.

It appears that the company only offers a right-hand version, because only the right glove features claws. Even though there two sizes are listed, it is unclear what those sizes mean. It is impossible to reach out to the company to find out whether a left-hand version is available. Although this is an As Seen on TV product it has gained numerous reviews from real customers which have a negative character. One of the customers' concerns is long shipping times which may result from limited marketing. The company tends to ship their products more. There are many users' reviews about the product of a mixed character. One and the same customer may be both pleased with their purchase but at the same time have some complains. Let's have a look at some of these reviews.

One woman writes in her testimonial that her Garden Genie Gloves smell horribly. She tried to use them gardening outdoors together with her mother and both women felt nauseous from the smell of low-quality plastic. The woman decided to air the gloves outside for a day but this did not remove the smell. Dirt gets stuck in the claws too much, and the customer was disappointed that only one glove had claws. She would not recommend these gloves to anyone. Besides the terrible odor, the gloves are made from very thin material, thus, they can be torn easily. The gloves are also scratchy. Another customer confirmed the fact that this product smells too bad. He could not use his purchase since it was practically unusable due to the terrible smell. The man wasn't willing to wear the gloves smelling like rotten food. The customer service leaves much to be desired too. The man wasn't responded for too long and when he finally reached the customer service he wasn't offered any good solution. He could not return the product to the company and get his money back.

One woman writes in her review that she ordered two pairs of Garden Genie Gloves as gifts. Both pairs were shipped in the same package. One of the boxes was damaged and the other box was fine. Probably, the first set had been returned. The woman noticed something sharp in the index finger of the right glove which she failed to remove. The woman did not try to use any special tool, but her mother managed to remove the thing inside. This customer says that she will never order anything through Amazon. Another customer reported that his finger broke off when he was digging in flower bed. The gloves appear to be too flimsy for gardening. Thin material can be easily punctured by sharp branches and thorns. These gloves are not recommended for gardening by many users. Let us take a look at the actual customers' reviews available on the market.

"My GardenGenie Gloves came crumpled up in a poly mailer. So the whole deal was very disappointing for me. The product itself has a poor quality and looks as if it will fall apart within the first five minutes of use. I was really looking forward to getting these gloves but they are not worth the money they cost. I would not recommend buying anything online. The company seems to sell knockoffs."

"I am not pleased with the Garden Genie gloves I received. The claws are too long and are placed too far out on the fingers' tips. This makes digging too difficult. The gloves fit me but the tips extending so far that it makes you feel like you are spraining your fingers while wearing the gloves. I think, this was the designer's mistake. The tips are made from a hard slippery plastic that makes it difficult to handle nursery pots when gardening. I had to switch to my old garden gloves to finish the job."

"I ordered two pairs of Garden Genie Gloves, since I expected a great revolution. However, I was very disappointed with my purchase. The first time I used the gloves, the rubber on the fingertips cracked. As a result, the dirt started passing through. This is not a good investment, even though the idea is quite good idea."

Garden Genie gloves do not seem to be a worthy product, mainly due to its poor design. First, the claws are featured on the right-hand glove only. Most users wish to have these claws on both hands for better functionality while gardening. The gloves are not eversible because the claws curve in a definite direction. Based on customer reviews, these gloves do not actually save users' time. They accumulate a lot of dirt and require thorough time-consuming cleaning too. It is not able to replace other hand tools. Another drawback of the Garden Genie gloves is their thin low-quality material. Taking into account everything we have learnt about the product, I cannot recommend you buying Garden Genie Gloves. There are other better alternatives at lower prices.

Where To Buy Garden Genie Gloves In Stores?

You can order the product from the official website of the company. One pair of Garden Genie Gloves costs $10 plus $6.99 shipping. You can add a second pair for another $6.99. You may be required to pay a $1 "web service fee" that is usually added to all orders on the product's site. The gloves are also sold on a number of retail stores including Amazon.