Hover Cover Microwave Reviews - What Is It?

WARNING: DO NOT BUY Hover Cover Microwave Until You Read This Review!
Is it a Scam? Does It Really Work? 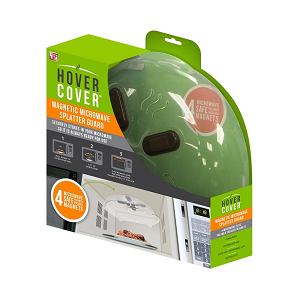 Hover Cover Microwave is a specially designed splatter guard meant to support the cleanness of your microwave oven. It is an As Seen On TV product that costs about $25 per unit. The cover is made from plastic and is claimed to fit above a plate, preventing its contents from splattering when it is heated up. The plastic can be safely used in microwave ovens. But what differentiates the Hover Cover from cheap plastic covers that can be bought from any housewares store? According to the manufacturer, the first one features a special technology that allows it to "hover" in your microwave oven. That technology includes four magnets on the cover's top. When you do not need to heat your food, or when you cook food that does not require the cover, you can simply lift it to the top of your microwave oven. The magnets will stick to the top, so you can safely pull your food out.

The manufacturer of Hover Cover Microwave says that the item is designed to save your time in the kitchen. You don't have to spend several seconds on pulling your microwave cover out of the oven and putting it on your counter, but you can just stick it to the top inside the oven. The cover can be stored on the ceiling of your microwave even when you are not using it. But who makes Hover Cover Microwave? Well, the company behind the product is named Enhance Product Development Inc. This is the company that helps different inventors to take their inventions to the market, since its staff deals with researching the market for you, filing copyright protection for the product, development of the product and launching it to companies for licensing. The company is based at the address: Minneapolis; 11180 Zealand Ave N; Champlin, MN 55316. Enhance Product Development launched a series of infomercials showing Hover Cover Microwave in 2016. Their official website is BuyHoverCover.com.

According to the manufacturer, Hover Cover Microwave features built-in steam vents responsible for the coolness of the cover while used in the microwave. The item fits most bowls, plates, and platters. It is dishwasher safe and rinses clean. The cover cooks food without a mess, which is its major tsk, though. Its plastic and magnets are microwave-safe and can be easily secured to the top of your microwave. The item fits almost all microwaves. It measures 11.5", so you will be able to cover even the largest platters of food. The item is also said to be food-safe and BPA-free. There is a great number of advertising for Hover Cover Microwave, which may make you think that it is a proper solution to a problem that doesn't really exist. But few people really need to store a cover in the microwave, don't they? The design is simple and exactly the same as that of traditional splatter guards. The only thing that differentiates it from others is four plastic magnets which allow it to be stored inside the microwave. These magnets can easily stick to the roof. When you need to heat up or cook food in the oven, you will need to pull the cover down on top of the food. It sounds like a no-brainer to have a cover on hand but the major concern here is that it will certainly need to be cleaned after each use. You may be sure that not everyone in your household will be diligent to clean it after each use. So, what you will actually see opening the microwave is a dirty Hover Cover Microwave hanging from the top.

In this way, you are expected to spend the same amount on time on using your new splatter guard. You will still need to take it out of your microwave to wash it and to put it back in the microwave. That's not time-saving, I should say. Some people do not use microwave splatter guards at all, while others use them for certain types of foods. However, some people use microwave covers for almost everything. If you use them often too, and the advertising looks attractive to you, think that you would spend much less money on a traditional splatter guard. The plastic magnets are not as vital, to my mind. One guy said online that he invented his own solution similar to Hover Cover Microwave. The man simply used a piece of Velcro glued to the top of his microwave oven. The man also glued the other side of the Velcro to the top of the splatter cover. He says that he keeps his splatter cover in the microwave. When he doesn't need to use it, he pushes it up to the microwave top. So, the principle of work is the same but costs so much less. The man says that no damage is caused to splatter cover or microwave. There are no splatters inside the microwave. He may need to replace the Velcro, especially from washing the cover, but it is working perfectly. Let us take a look at the real users' reviews who bought the Hover Cover Microwave.

"I got my Hover Cover microwave during the holidays but it has raised several concerns of mine. I put the item into the microwave oven, used it several times, then my microwave started shorting out. I was very scared because this had never happened before. I have had the same microwave oven for more than two years. In my opinion, this piece of junk is too expensive and can damage your microwave! I wouldn't recommend it."

"I bought two items for $25 from the official website but then I learnt that you can buy Hover Cover Microwave directly from China for $4.99 on Ebay with free shipping. I noticed that the magnets don't stick well to the microwave of my mother. I looked at the top of her microwave. It is plastic right where the magnets would go. This is the reason why this wouldn't work. Mine has some metal that allows the Hover Cover to fit against the top of the microwave. Be attentive with your purchase."

"I bought HoverCover Microwave a week ago but it does not adhere to my microwave. It is a completely useless purchase for me. I don't think that it is any better than other covers. I purchased it because I liked the idea that it could be stored directly in the microwave oven. Waste of money! Do not order this item from their website. It will cost you $25 for two items. You can buy it for $8.59 at Walmart."

Hover Cover Microwave is advertised as a product that can solve a niche problem in your kitchen, since it can be stored in the interior of your microwave. However, there are several important aspects for you to consider before buying this microwave cover. First, it is not suitable for all microwave ovens. Second, it will not save your time, since you will still need to spend your time on washing it. Third, it is a too expensive splatter guard. You can buy minimum two items for $25 on the official website. But a traditional microwave cover can be found for just $5. Hover Cover Microwave is not as convenient to use as claimed by the manufacturer. Taking into account all pros and cons of this product, I cannot recommend it to buying.

Where To Buy Hover Cover Microwave In Stores?

Hover Cover Microwave comes with a very confusing pricing policy. You cannot order just one item from the official website of the company. The minimal order is a double package. The second one is said to be "free" but you will need to pay additional $5. Here's how pricing of the product looks. Two Hover Covers are priced at $24.97 ($14.99 + $9.98 Shipping), four Hover Covers cost $49.94 and six Hover Covers can be bought for $74.91. You can upgrade your order to "Deluxe" but you will need to pay $5 more per item. Deluxe features an anti-slip grip, stronger magnets, and a two-year extended warranty. Hover Cover Microwave is only available in the United States and Canada. It can be bought online through BuyHoverCover.com. All orders come with a money back guarantee, but you will have to pay for the shipping. You will also need to pay for your own return shipping. To request a refund, you'll need to call at 866-518-2290. Remember that state tax will be added to orders placed in CT, NY, NV, and CA. A $10 surcharge is added to orders from Guam, Canada, Puerto Rico, US Virgin Islands, Hawaii, and Alaska. Hover Cover Microwave cannot be ordered from Quebec.