NuWave Brio Reviews - What Is It?

WARNING: DO NOT BUY NuWave Brio Until You Read This Review!
Is it a Scam? Does It Really Work? 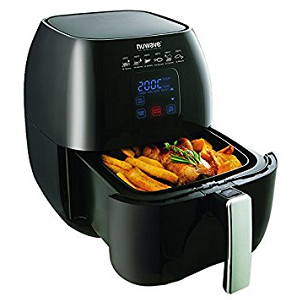 NuWave Brio Air Fryer is a new product meant for cooking fried foods with almost no oil. This device allows you to cook fried foods in a short amount of time. The official website of the product is (mynuwavebrio.com) was registered in February 2016. It is clear that both the company and the product are quite new on the market. In order to get fried taste and crunch you are claimed not to be obliged to use any oil. It features intuitive digital interface and a three-quart capacity basket. The device is dishwasher safe. It has Auto shut off and cooks foods with less calories. While cooking, the temperature may range from 100F to 390F. To better understand whether the product really works; let us take a look at some other features, as well as at real customers' reviews available on third-party websites. But at first let's check what information is available about the manufacturer of the device. The company behind the product is called NuWave. You can contact their customer service representatives by calling at 1-877-689-2838, Monday through Friday, 7:30am - 4:30pm, CST. The official website provides the postal address of the company: NuWave, LLC.; 1795 Butterfield Road, Libertyville, IL 60048-1212; United States of America.

The NuWave Brio Air Fryer is advertised on TV and online. It highlights the claim that you can fry crunchy foods without the use of oils. As a result, you are expected to get healthier "fried" foods consumer. The design of this electric digital air fryer allows food to be cooked from all angles, which means that you don't have to rotate or flip during the cooking process. It is provided through an inner basket enclosed in an outer basket, which allows grease and fat to drip down into the reservoir. Both baskets can be easily inserted into the unit like a drawer. You can pull them out together with a handle. After removing them from the unit, you can separate the inner basket by flipping up a black protector to see a button that is meant to help you remove the inner basket. Some users say that this piece is flimsy, small and has snapped off. For this reason, you should be careful when handling it. The official website provides a chart for cooking times. Even though it seems to be accurate, you may need to fine tune it to your needs. The food is said to turn out crispy in a short amount of time. Technically you don't need oil, but adding a small amount will prevent your food from drying out and help keep it moist.

The NuWave Brio features a digital display for you to set the time and temperature accurately. It takes a small amount of counter space, so it won't be an intrusive addition to your kitchen. Based on the number of people you need to feed, the size may be a problem. The Brio will produce more than enough food for two people but if you have to feed a big family, you will probably have to cook in a few batches. Probably, the biggest disadvantage about the NuWave Brio is that you will need to buy many accessories for additional money. Thus, the reversible rack will cost you another $25, while the grill pan is priced about $50, and the baking pan costs $55. The use of these accessories could double your cost. While many customers think that this device is a fine addition to their kitchen, others find it unhelpful, mainly because it is only enough for one or two people. For families, you will need to buy some larger alternatives. Let us take a look at what real users are saying about their experience of using the device.

Thus, one woman writes that she received a Nuwave Brio Air Fryer as a gift for her birthday. According to her words, it cooks well and the woman uses it quite often. But after using it once, the Base tray button did not release the Fry Pan Basket. It was stuck. The woman was suggested to exchange the Air Fryer for another one. She agreed thinking that the first one was defective. But after receiving the second replacement, the woman faced the same problem. The Fry pan basket did not release from the Base tray. This is a defect in the manufacturing style of the product, which is too bad because the user likes the way the device cooks. She cooked a turkey breast which turned out great but with a defective basket, it is difficult to clean the basket and fry pan. Food gets stuck at the bottom if the bottom is sprayed with oil. It is not a "non-stick" bottom. The basket started to peel inside cooking basket, which can be very unhealthy to cook food on. It is high time to take a look at the real customers' reviews available online.

"When I just bought Nuwave Brio the product worked well enough but it broke within 90 days. I called the company's customer service and they suggested having it replaced. But I had to pay for the shipment of a new one. I was also expected to pay shipping to send the broken one back. I did not like such rules! What awful customer service! I will never order another NuWave product. I don't recommend this company to anyone. The process of returning the product was terrible for me."

"Be careful with Nu Wave Brio. I bought the unit in early January. I accidentally touch it when it was cooking food. It was extremely hot! What I saw next simply terrified me. The wires have burnt through the plastic shell. I have already sent an email to the manufacturer but I haven't been responded yet. I don't think that I will get my money back. If you have the unit too, don't keep it plugged in. Share this information with anyone who might have one."

"I bought NuWave Brio in September and by December this product no longer worked. I did not use it very frequently. The tray/door keeps saying open even when it is shut. I tried to unplug and plug it back but this still did not help. I had to contact the NuWave customer service to see if they had a fix but since I bought it on Amazon they refused to provide me with any support. I don't know how to fix the item."

Summing everything up, I don't think that NuWave Brio is a good cooking device. It does not appear to be as effective as claimed by the manufacturer. The unit may be unsafe for your health and life too, based on some customer reviews. I would not recommend taking risks, especially when the market is full of similar alternatives. The official website of the product is not informative enough when it comes to safety measures. The instructional video looks like an advertisement more. With all this in mind, NuWave Brio cannot be recommended to buying. There are electric air fryers in stores and online. The best seller in this category is the GoWise 3.7 qt air fryer that can be bought for $88. That model has a 4.3 star rating among more than 200 reviews. It comes in different colors.

Where To Buy NuWave Brio In Stores?

You can buy the product from the official website for three payments of $33.33 plus $19.95 shipping. Thus, the total cost will be $119.94. You may get a coupon for reduced shipping if you leave the order screen open for a long period of time. NuWave Brio can also be found in some stores such as Beyond and Bed Bath for $99.99. The online offer includes bonuses, namely a knife/cutting board set, a 5 piece utensil set, or 4 piece knife set. You can choose any of these bonuses but they are not included when you buy the product in stores.