Snoo Reviews - What Is It?

WARNING: DO NOT USE Snoo Until You Read This Review!
Is it a Scam? Does It Really Work? 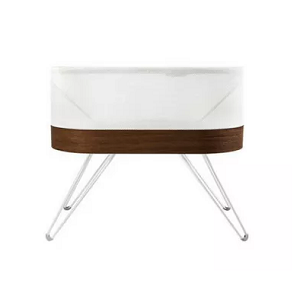 Choosing a comfortable and safe place where your kid is going to sleep is a rather stressful decision made by new parents. It can be their own crib, a bassinet, a co-sleeper or your bed. A new place for your child's sleep is known as the Snoo Smart Sleeper. It is designed in such a way as to gently rock your kid for better sleep. It also connects to an app on your phone to allow you to customize settings and get alerts when your baby needs attention. It is very expensive ($1,160) and cannot be afforded by everyone. The Snoo was developed by Dr. Harvey Karp who claims that it is the safest baby bed ever. Karp has written a book called The Happiest Baby on the Block. It introduced the idea of the fourth trimester, the postnatal period when a baby needs to be reminded of their time spent in the womb to feel safe and secure. These reminders may include swaddling, shh sounds, side/stomach position, sucking, and swinging. The Snoo is designed to perform these functions.

Before we discuss how this device works, let me say that the product will not function without a special swaddle that needs to be clipped into place inside it. This swaddle is said to keep your baby safely in bed. It is recommended to stop swaddling the baby once they start to roll. The swaddle restricts movement, making it difficult for them to get out of the stomach position. The Snoo's swaddle is made in such a way as to hold the kid's arms firmly to their sides while keeping them from rolling over. The swaddle is made of organic cotton. Babies start rolling in the first few months of life, so the Snoo is meant for use with kids up to six months. The swaddle uses Velcro to secure in place. I am worried that it might collect lint and lose its rigidity over time. The bassinet looks nice. Thee is addition of wheels that will help you to move the Snoo to another room. It's heavy at 38 pounds, so it will be hard to move without wheels.

The device is said to be very simple and intuitive to use. It works with the main purpose to calm your baby using motion and sound. You are not required to do anything. The product has built-in microphones which serve to detect the baby's cries. In general, the Snoo adjusts its calming behaviors accordingly, through white noise and motion. In this way, the sleeper tries to soothe a fussy baby for three minutes. If it does not work, it will alert you via the special app. It means that your baby needs you. The Snoo app is available for iOS and Android devices. It has an attractive interface. The Snoo connects to the app via Wi-Fi, so you will be able to check quickly where you are, not only when you're in Bluetooth range. The app will accompany you through the setup process. You will need to connect to the Wi-Fi signal generated by the sleeper, before connecting it to your home network. Usually it takes about two minutes. Once connected, the app will give you an opportunity to adjust the intensity of sound and motion. The higher levels may be a little too much for a newborn baby. You are recommended to turn on the level limiter to ensure that the Snoo would keep its calming attempts quite minimal. The weaning mode will stop the motions when the baby is sleeping calm, so your kid will be sleeping on a still surface.

This device isn't magic, though. According to many customer reviews, it doesn't keep a baby from crying in the middle of the night. Every baby needs to be changed, fed, or burped at night. But when a baby is fussing, the Snoo may be helpful in soothing them back to sleep for the rest of the night. It may provide the user with lots of time in the evening and in the morning. Some users reported that they experienced an issue with the unit. The Snoo bumped its calming behaviors to higher levels even though the baby was calm. According to the company, this glitch has been resolved. With this sleeper you are promised to get an extra set of hands, since the device is able to rock the baby while they are sleeping at night. Let's see what real users are writing about this bassinet in their testimonials.

There are not so many customer reviews about the product online. The customer reputation carries a mixed character, thus there are both satisfied and unsatisfied users. Most of them complain that it is a very expensive sleeper, especially when you consider the fact that it can only be used for six months. The Snoo is claimed to take care of your child while you are involved in some other activities; however, it is not quite true. According to customer reviews, nine times out of ten end with checking on their baby. Of course, the sleeper may work for some babies, but clever kids can figure out how to outwit the system. It should be noted that the failure of the device becomes apparent only after the 30-day trial, which is a big drawback when longer-term problems occur. Some people confess that their baby is smarter than the Snoo. The device spends just 2-3 minutes trying to quiet your baby, and then it gives up. It will just shut off, and the baby is left screaming until you take action. This may be enough for weak-willed children, but cleverer kids tend to maintain a low-wail until the device shuts down, then they switch to high pitched wail. Let us take a look at the actual customers' testimonials.

"Do not waste your money on Snoo! It does not soothe a baby. On the contrary, this product made our baby throw up and cry. Many babies are born today with a special need to be sleeping reclined, but this sleeper does not work for this purpose. It never worked for our daughter. I would give it zero stars, especially taking into account its high price."

"Snoo is a beautiful bassinet but it is completely useless. It is made from top quality materials; however, I think it is overpriced. Besides, it has potential safety issues. I had to return it in a week after I purchased it. The first problem I faced was the way it shakes. It cannot soothe the baby. The second issue of mine was that the speed cannot be controlled. It is set up automatically. When it detects crying, it escalates too fast."

"We got snoo before we had our baby and we really liked it. It was not that easy to assemble, though. The swaddle had to be attached to make the machine start working. However, we got completely disappointed with this sleeper when our baby was born. Our son hated being swaddled. The machine rarely had a soothing effect on him. I found out that the swaddle was stiff and cold. We used it seldom will our baby was 3.5 months. Then we transitioned him into a big boy crib. I am currently trying to re-sell this expensive thing."

The Snoo is not as great as promised by the manufacturer. It does have a beautiful design and a nice swaddle but it fails to soothe a baby in many cases. Some parents even claim that it can be unsafe for little ones. It shakes a baby too much, based on some customer reviews, even if you buckle up your baby with the swaddle. A one-month old child will have their head rolling sideward because the infant's neck is too weak. Of course it mutes the kid, since they are just unable to start crying under this type of motion. Can you imagine a baby feel nauseous? Another drawback of this machine is that the speed cannot be controlled manually. When the sleeper detects that your kid is crying it reaches the highest level of speed very fast. Finally, this bassinet is too expensive. It is also only suitable for babies up to six months. With this in mind, the Snoo Smart Sleeper cannot be recommended to usage.

Where To Buy Snoo In Stores?

This sleeper can be ordered from the official website of the company or from some retail stores.