Soft'N Slo Squishies Reviews - What Is It?

WARNING: DO NOT BUY Soft'N Slo Squishies Until You Read This Review!
Is it a Scam? Does It Really Work? 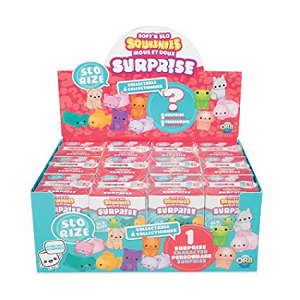 Soft'N Slo Squishies are squishy toys meant for children of all ages. They are made from special plastic and are shaped like tasty foods, including ice cream cones, pancakes, a cake, cupcakes and more. In general, there are eleven Squishies, so a kid may find it fun to collect them all. These toys come in packs of three, all of which look realistic, are brightly colored, and feature realistic textures. They are fun to squeeze for both boys and girls. It is also interesting to watch them "rise".

Soft'n Slo Squishies are manufactured by ORB, a company that also manufactures other toys for children, but probably, this collection of non-edible goods are the most popular. Their first product line Sweet Shop entered the market on July 15, 2017. This line is created for dessert lovers and offers an entire menu of sweet squishies the look like delicious after-dinner treats. What attracts buyers the most is the realistic texture and adorable accents of the items. These soft treats can be squished, pulled, plopped and even juggled! They resemble smooth stress balls and have the shapes of cookies, pies, cupcakes, etc. Soft'n Slo Squishies are designed to rise slowly after they are squished, just like the baked goods tend to act in the oven. Squishies are look very attractive but they do contain a non-toxic additive meant to taste bad to prevent the users from eating these toys. Besides, it would be hard to take a bite out of these items, but it is better to hide the Squishies from your dog. The original manufacturer packaging is attractive and the product is licensed. Is this kind of toys really good for children and adults? Let's try to answer this question by taking a look at the real customers' reviews left online.

Soft'N Slo Squishies work in a very simple way. All you will have to do is to push on one of these items with your hands. The toy will get smaller, but when you let go, it will rise again and acquire its initial shape. But unlike bread being baked in the oven, you won't need to wait a half hour to see how it rises. This small toy can get a larger form in less than a minute. But are they as great as claimed by the manufacturer? Let's find out by discussing real users' opinions. At the time of our research there were 26 customer reviews on Amazon with an average rating of 3.2 starts out of 5 stars. What people liked about Soft'N Slo Squishies are their bright colors; however, they do not look naturally, since real baked foods cannot be as bright. The toys have quite realistic sizes, which make them similar to their real-food counterparts. For example, a cupcake is about the same size as a real one. The same can be said about an ice cream cone and other items. These toys will be too big for babies to put in their mouths; however, it is not recommended to give these toys to children under three. Soft'N Slo Squishies are collectible, which means that a child may take on the challenge of getting all eleven items. These toys come in sets of three, so one set can be purchased for three kids, which is quite good taking into account high cost of the product.

However, some people report that these toys are not as nice as they may seem. A few customers reported that the Soft'N Slo Squishies they received were too hard and felt like a rock. They were too hard for children to play with. Besides, the smell of the items is awful, based on some reviews. Some people feel very upset because they expected these things to be much softer. They are also not as squishy as expected. Many customers find these toys way overpriced. One buyer reported in her testimonial that the squishie she received was not only extremely hard but also has a lot of defects! It was certainly not worth the money it cost, according to this woman's words. Both her daughter and her felt disappointed. She also said that her child expected it would smell like a cinnamon bun but it didn't. At least, the product arrived quickly. Another customer tells that he just received a squishie for his son and it wasn't excellent at all. It is cute, but it does not rise slowly. Instead, it bounces right back, probably, because it is hard. Let us take a look at some of the actual customers' reviews found online.

"I bought SoftN Slo Squishies for my children last week but I am returning the product because it really stinks. It is not fragrance free, as promised by the manufacturer, but it smells like chemicals. Your hands will stink too after playing with this toy. I am not going to give these things to my kids. It can be dangerous for child's health. Beware of this product and do not order it ever. It is too overpriced for such poor quality. Avoid it."

"I ordered Soft N Slo Squishies for my daughter from Amazon and I don't really like this toy. Even though my girl loves these squishies I am going to send them back. My major complaint is that it is not soft enough. I can see that my little daughter as to apply a lot of effort to squeeze it. We are both are disappointed that it has no pleasant smell either. I think a toy for such high price could have a nice foods flavor. The company also needs to indicate how soft their toys are. You never know what you are buying."

"Soft'N Slo Squishies are bad, according to my child's words. These squishies do not "slow rise" but they just pop back up immediately after being squeezed. As a result, my son receives no squish satisfaction with this toy. It is also hard to squish. Almost everything about this toy is disappointing. I am returning my purchase. Buyers beware! It is better to buy toys for your kids from toy shops where you can check the toy you are buying."

Summing everything up, I cannot say that Soft'N Slo Squishies are a nice toy for kids. It has a number of negative points. You can never pick what you will get in a set. You will have to accept what the company's staff puts into your box. That's frustrating, of course. You can be surprised pleasantly or unpleasantly. While some people find this fun, it may be very disappointing if you receive doubles of items you already have. Remember that the toys are very expensive. The next drawback of Soft'N Slo Squishies is their low quality. Customers report of receiving defected products very often. They are also concerned with the strong chemical smell of these toys. Some people are so worried that they don't even give these items to their kids; instead they immediately send them back. However, not all customers succeed in getting a refund. Many buyers report that the toys they received do not slow rise as promised in the advertisement. They are also often too hard. If you want to please your children with nice toys, remember that they need to be safe, educational and manufactured by a reputable company. With all this in mind, I cannot recommend buying Soft'N Slo Squishies online.

Where To Buy Soft'N Slo Squishies In Stores?

The product can be ordered from the official website of the company or from some of retail stores. In general, Soft'n Slo Squishies come in three sizes: small, medium and jumbo. Their cost ranges from $5.99 to $14.99. The price of a Soft N Slo Squishies set on buysoftnslosquishies.com is $24.99 plus $6.99 shipping. Thus, a total price will be $31.98. Amazon sells separate toys. For example, Soft'N Slo Squishies Jumbo Cinnamon Roll can be purchased for $9.44 plus free shipping.