StarTastic Reviews - What Is It?

DO NOT USE StarTastic!!! You Must Read This Review!
Fully Researched: Price, User Feedback and More! 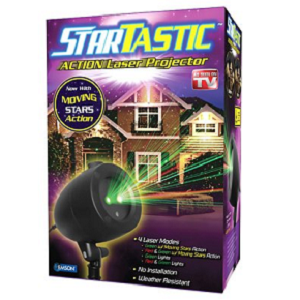 StarTastic is a light show which can be used in home surrounding indoors or outdoors for a great laser show. The official website of the product is trystartastic.com. It was registered in December 2015. This device works by projecting red and green lights onto the surface in order to provide you with a brilliant light show. It requires minimal effort from your side. In order to use StarTastic, you will simply need to plug the device in, locate it on the ground with the help of the attached stake and point at any location you wish. The angle of the projected light can be adjusted and the final result is simple and beautiful. In this way, you will need just a few minutes to illuminate your home. There is a built-in sensor that senses whether it is day or night and shuts the lights on or off. Some competing products don't have this feature. You can choose from two modes - a display featuring only green or the one featuring both red and green lights. However, there is no red-only display, and there are no more other colors such as white or blue. Some people do not think that red and green are enough for creating a nice light show.

Remember that the cord is short, so you will need an extension cord to use the device outside. This makes storage less bulky. According to the manufacturer, StarTastic has average durability; however, it may be very fragile, since it is made mainly from plastic. It is not recommended to leave this device outdoors for a long period of time, especially in summer. This may lessen the life of the item significantly. According to the Amazon page, a lot of users who have reviewed this projector received it for free or at a discount in exchange for their positive opinion. This certainly skews a person's objectivity, so it is better to read those reviews carefully. We have noticed that the safety of this type of product is associated with a few concerns. In late 2015, the FDA suggested that laser light might be potentially unsafe for pilots. So, consumers were urged to point their lasers at their homes, not into the sky. StarTastic should be used indoors with great caution. Remember that human beings and animals should not look directly into the lights.

As it was already mentioned, StarTastic is associated with a few concerns. For example, its light should not be directed into the skin, since it can be dangerous for airplane. Second, one should not look into the lights of the projector directly. This can be harmful for their eyes. Many people complain that StarTastic does not get the job done as advertised by the manufacturer. Besides, it is not priced competitively. There are many other products of the kind that work better and cost less. Let us take a look at what real users of the device are writing about their experience of using it. One guy says that he would give it zero stars if it was possible. Just like many other customers have noted, there is a big design flaw in the green and red mode. After two or three nights, one of his two projectors started flashing on and off when being in this mode. What is worse is that after trying to return the unit, Amazon refuses saying that it is ineligible for return. The man bought this unit less than thirty days ago. He asks everyone to stay away from this product. He just lit $15 on fire.

Another customer writes that he wishes he doesn't like giving a bad review but StarTastic is not worth the money. He simply cannot give it a better rating. We got the thing last week and put it up in the yard. It started not coming on right away. They got it to work by keeping pushing the button. They have had the projector less than a week and it started flashing only green and red. It will stay on steady green which is unattractive! The customer didn't like the flashing, since he just wanted it to stay on with both red and green. The man regrets he bought it. Another young man describes the story of his. He says the seller replaced the first projector he bought with another one. The latter worked for about an hour and did not come back on, even though je plugged it in right. Thus the man had to get a "Star Shooter" brand static laser light show, which works so much better. The man is sorry that he cannot return StarTastic back to the company for a refund. This unhappy customer doesn't recommend this product to buying. He adds that it is also cheaply made and doesn't last long. StarTastic Holiday Light Show Static Laser is much better. Some other customers reported that they received defective products and are not pleased with the customer service. It is high time to read some reviews left by the actual users of the projector.

"I bought StarTastic and started checking this unit immediately after its arrival. I plugged it in but didn't realize about the sensor. It turned on the Red/Green and then created a Puck sound. I took the item into a slightly dim room. The red blinked. Green didn't work at all. I went to another store to buy a projector from a different brand (Star Laser). When I inspected StarTastic, I found out it was used because there was some dirt on the ground peg. Fortunately, I received a refund."

"I purchased my StarTastic from the official website of the manufacturer and the red worked two nights only. Now it does not work anymore. Green is too dim. I tried to contact the company several times but I received no response at all. I am disappointed. Do not buy anything from this company."

"I bought StarTastic a week ago, then it started blinking in red and green mode. I changed it for another one and had the same situation. The third time I went to the store and had them plug it in before exchanging it. The projector worked well but when I came home and tried it, the thing started blinking! So, I had three defected units. When I brought the item into a completely dark room, it did not blink but when I brought it back into a room with a bit of light, it would blink. Once I put my finger over the sensor, it stopped blinking. The unit is sensitive to light, which makes it impossible to use. I returned it a few days later."

StarTastic is claimed to be a high-quality light show projector that can be used both indoors or outdoors. All you need to do is to plug it in and point to the surface (at your house). Do not direct the light into the sky or into anyone's eyes. The device is said to use 99% less electricity than standard lights. It promises to turn on and off automatically during day or night. It is also water and cold resistant. However, despite these advantages, the product as many disadvantages too. The first drawback is that it has two modes only: green only, or red and green together. StarTastic is linked to the number of complaints from actual customers. The major problem concerns the light mode that often starts blinking after a few uses only. Many customers had to return the product back to the manufacturer or the store; however, few of them managed to receive a 100% refund. We have learnt that the product starts blinking in the room where there is some minimal light, which is certainly very disappointing. With all this in mind, I would recommend spending your money on something else. Avoid buying StarTastic.

Where To Buy StarTastic In Stores?

This kind of a show projector can be purchased directly from the manufacturer or from some retail stores. Amazon sells one unit at the price of $26.97 plus $0.00 shipping. It is considered to be a rather expensive item when compared to the competition.