MyPurMist Reviews - What Is It?

WARNING: DO NOT USE MyPurMist Until You Read This Review!
Is it a Scam? Does It Really Work? 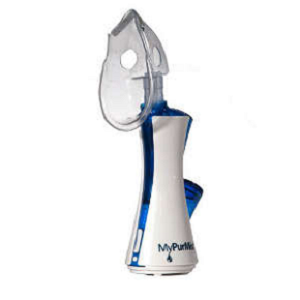 MyPurMist is a handheld steam vaporizer that was created for people who suffer from minor respiratory problems related to congestion or dryness. The inhaler delivers a fine warm mist of droplets that are claimed to be less than five microns) into the lower and upper respiratory tracts to ease unpleasant sensations. This steam is made through the use of through capillary force vaporizer (CFV) technology, not through boiling water. Its technology utilizes pressure and ceramic heating elements. The item is powered by an AC power source. A replaceable latex-free inhaler mask is attached to the end of the MyPurMist unit, like that used by a traditional nebulizer. The inhaler should be put over the face. It works by releasing steam vapor into the mask by pressing only one button. You can control the temperature of the mist with four temperature settings (ranging from 105-115 degrees). There is an internal computer that heats the mist to the required temperature.

MyPurMist is able to hold about an ounce of water which lasts for 25 minutes. The red light indicates when the water is depleted. It is important to use only distilled or demineralized water in the unit, and this water should not contain added minerals or electrolytes. Although the site recommends to clean the unit before long-term storage, it features an internal fan which turns on for ten minutes after usage. This fan has a built-in drying system responsible for keeping the unit clean. There is also an automatic shut-off that turns the unit off after ten minutes of not being used. MyPurMist is not manufactured by the same company that produces Purwater. The latter is made by a company called Kaz. MyPurMist is manufactured by Vapore, LLC. This is not a reputable or well-known manufacturer in the country, but it has an official website. The MyPurMist commercial says it is trymypurmist.com. This site was not loading at the time of writing this review. but we have learnt that their official website is mypurmist.com.

According to the official website, the product comes with some promising claims. MyPurMist uses steam as a natural decongestant that is able to quickly relieve sinus congestion, dryness, cold symptoms, and respiratory allergy. The unit is safe to use (free from germs). There is nothing difficult about its usage too. We have encountered a great number of user reviews for the product. Some of them are positive, claiming that the product works well. However, the majority or reviewers report that it does not work as advertised. The most common negative complaint was that the item had broken down after several weeks of usage. Besides, MyPurMist has a higher price tag when compared to the competition. Potential buyers are recommended to consider the quality of the product before purchasing it, and evaluate cheaper products of the kind.

At present, there are over 700 reviews about the unit on Amazon with an average rating of four stars. Some of the positive testimonials report that MyPurMist worked as advertised but many reviews carry a negative character. The biggest complaint among them is that the unit is not portable because it is powered by an AC adapter only. The latter works on a cord (several feet long). About 25% of the Amazon reviews are estimated with one to three stars. A great part of these reviewers claimed that their units stopped working after a few weeks of operation. Many of dissatisfied reviewers reported that the unit had too high price for what it could do. Many units used to malfunction. Another concern about MyPurMist is that it cannot be used by those with asthma. These patients are highly recommended to consult their doctor before purchasing this unit. There is precaution that MyPurMist should not be used as a replacement for a traditional nebulizer. Pouring more fluid into the respiratory tracks could be harmful for asthma sufferers.

Users complain that they have to their water to have warranty protection. The hype advertising does not contain this warning and you only learn of the water requirement after you buy MyPurMist. One woman reports that she called the company before buying the product and was told that she could use distilled water. By the way, a gallon of their brand water costs $126.00, while a gallon of distilled water costs only $1. Many users had mechanical problems with the unit. It seems that the advertising behind it is completely false. It is probably better to get a corded unit to avoid these problems. People who tried to return their units found out that the company's customer service did not care. One guy wrote in his review that his unit's motor died immediately after it was turned on. Lights would blink, and that was it. He just wanted relief, instead he felt only disappointment. It is high time to read testimonials from actual buyers of real MyPurMist.

"I received my MyPureMist package recently. I was very excited to try it but I noticed that the product's box was damaged. I received my order from Costco. It seems this box was damaged before shipping. The sticker on the box had been probably removed and reapplied and there was another previous seal under that moved sticker (sliced in half). The cord was not wrapped well. There were all signs that the inhaler had been used before. I decided to return it back to the company."

"MyPurMist is complete garbage for a high price. I used it only two times and was completely underwhelmed. Their little bottle of water is extremely expensive and seems to be a complete scam. You can buy distilled water at any store much cheaper. I returned this piece of junk and request a full refund. I ended up purchasing a little Vicks Personal Steam Inhaler for $29 and I am pleased with it."

"I ordered MyPurMist for my son who needed this unit for his sinuses. As soon as we tried it we realized that it was broken! The water poured out of it! I returned that unit and ordered the second one. Believe it or not but it leaks too not as intensively as the first unit but still there is a constant leak from the point where the rubber meets the plastic! A product for $150 should not leak!"

MyPurMist does not seem to be a high-quality steam vaporizer. While some users report that it fails to ease their minor respiratory problems, other have more serious complaints about the product. Many customers confess that their units had broken down within several weeks of usage. Besides, MyPurMist has a higher price tag when compared to better products of the kind. Some users also report that their device leaks. There are numerous complaints about the necessity to buy very expensive water from the company too, while cheap distilled water can do the same work. Taking into account these drawbacks, I cannot recommend MyPurMist.

Where To Buy MyPurMist In Stores?

MyPurMist can be purchased from mypurmist.com or in stores such as Walgreens, Target, or Bath Bed and Beyond. The price of a basic MyPurMist unit when bought from the product's website is $149.95 plus free shipping and handling. Prices in stores may vary. A basic MyPurMist kit includes the unit itself, a storage bag, an adult-sized inhaler mask, and a 9.5 oz bottle of MyPurFill (demineralized water). Each purchase comes with a one-year warranty (covering manufacturer defects). When buying MyPurMist from the site or by phone, it comes with a 60-day guarantee which provides a full refund to the customer within the first 30-60-day period of usage. Afterwards, the guarantee is void. Remember that opened products cannot be returned or refunded.